An evening of celebration for Lytham St Annes Circle

Recently members of the Lytham St Annes Circle, accompanied by their wives, gathered at the Glendower Hotel, LSA to celebrate the presentations of a 50-year membership scroll to Brother Adrian Crook and a 40-year scroll to Brother Past Grand President (PGP) Tony Godden.

In addition to the Brothers of the LSA Circle there were twenty Brothers from throughout the UK at the meeting to celebrate Adrian’s and Tony’s milestones.

After an enjoyable meal and under the watchful eye of the present Circle President, Brother Charles Murphy, the Master of Ceremonies, former PGP Brother Mike O’Malley got the formal part of the evening underway.

The Scrolls were presented to Adrian and Tony by the Past GB National President Brother Eddie O’Donnell, who had travelled from his home in West Lothian with his wife Catherine, to conduct the ceremony.  Both scrolls should have been presented during the Covid-19 restrictions when Eddie was GB National President.


Brother Adrian Crook is a well-known visitor to Catenian Circles in the area. His first visit was from the family home in St Annes, when his mother took him to be born in a Maternity Home at Blackpool!Adrian has a strong voice, honed as a bingo caller during a summer job on St Annes pier, before starting his working life at BAE Systems, Warton. Adrian’s father introduced him to the Circle, but unfortunately passed away a month before his formal installation into the Lytham St Annes Circle at their meeting in June 1970. His parents were the Mayor and Mayoress of LSA in 1956-57 and opened the ERNIE Office during their year and were given the second Premium Bond in the UK. (By the way, the number has never come up!) Adrian moved from Warton to Cambridge and then to Holland working for Phillips for 30 years. During his absence he kept his membership alive and attended meetings when on holiday. Adrian retired and left Holland for LSA in 2001. He immediately immersed himself in the Catenians, becoming Circle President in 2002 and 2003 and also again in 2015 as well as holding many more posts. Adrian is a Knight Commander with Star of the Equestrian Order of the Holy Sepulchre of Jerusalem and has made numerous Pilgrimages to the Holy Land. During one in 2014, he first met his future wife Susan. They were married in April 2017.


Brother Tony Godden joined the Maidstone Circle in 1981, moving to Lincoln, then becoming a member of the West Lothian Circle taking a major role, and finally ending up in the Lytham St Annes Circle. In 2011, Tony became Grand President. During his time in office Tony, accompanied by his wife Kelly, travelled to Australia and the Indian sub-continent, where he inaugurated new Circles in both countries, as well as Ireland and Malta. During their year they were away from home for 222 nights, took 46 flights, 22 rail journeys and drove 18,500 miles. Tony worked in Higher Education, ending up managing a College with 8,500 enrolments and a staff of 300 plus. After taking early retirement, he became Business Support Manager for a group of eleven schools. Tony is also a Knight Commander with Star of the Equestrian Order of the Holy Sepulchre of Jerusalem.

Posted by Robert Thompson at 11:07 No comments: 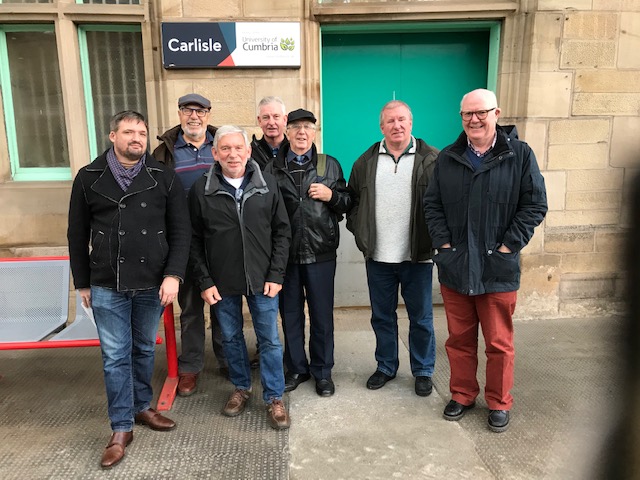 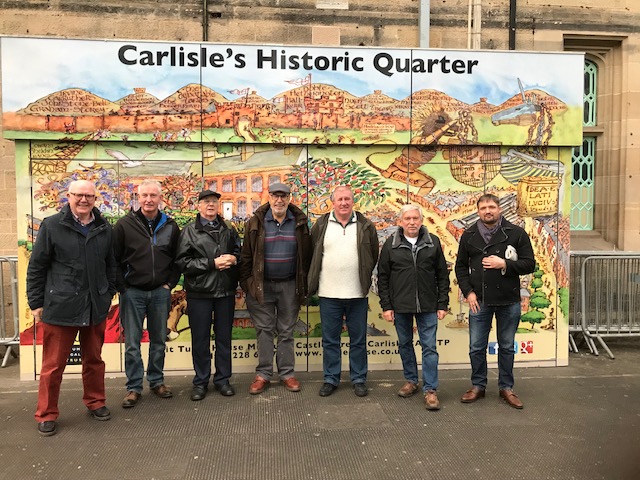 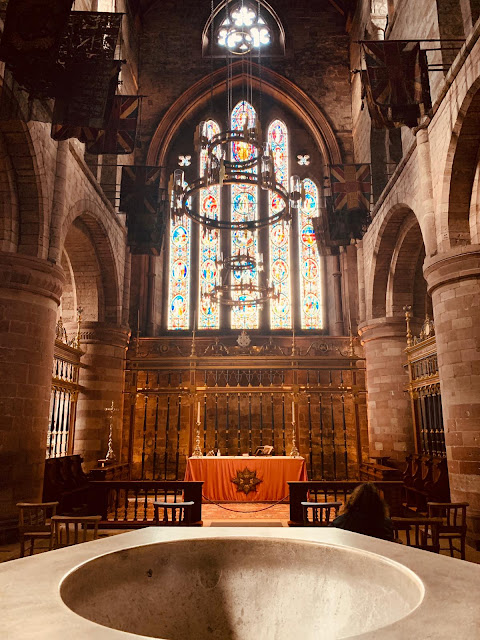 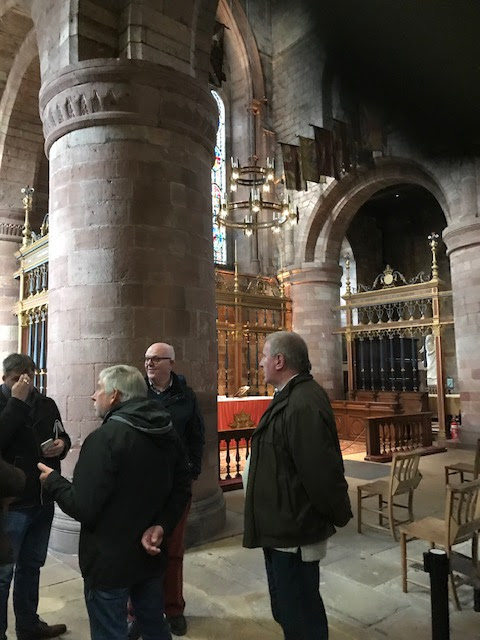 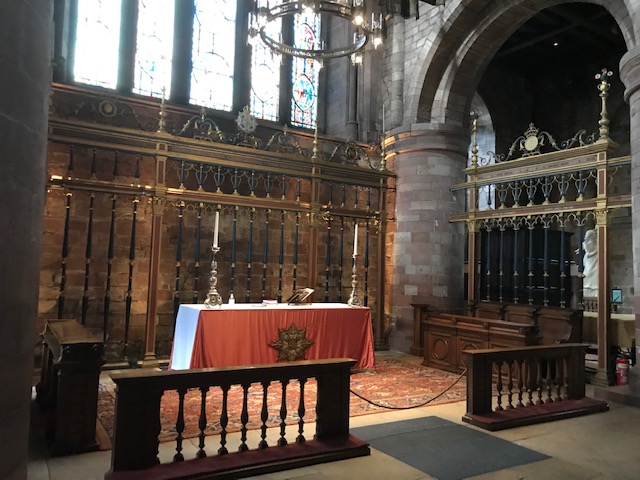 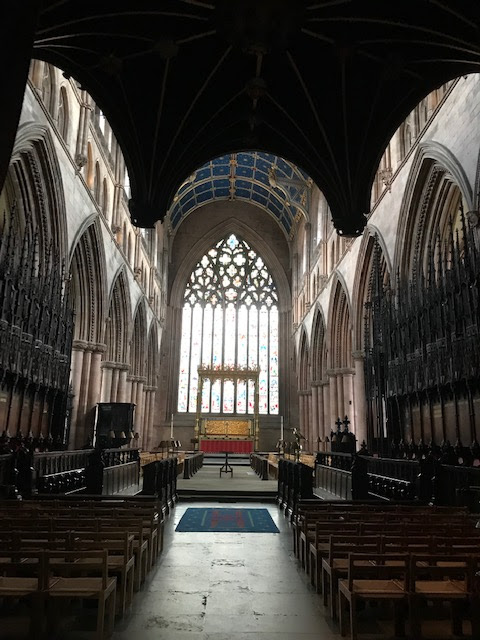 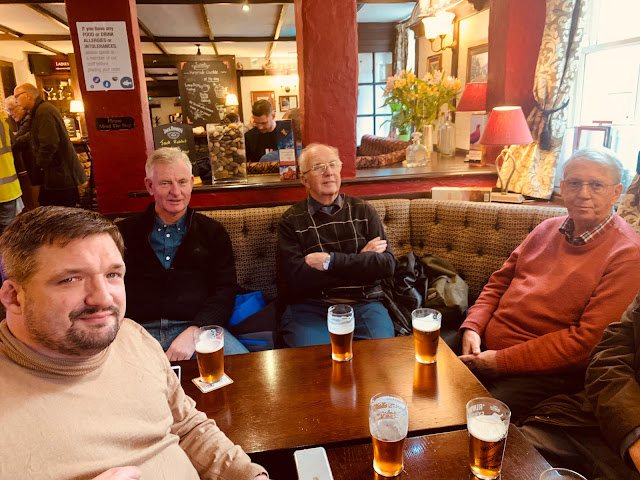 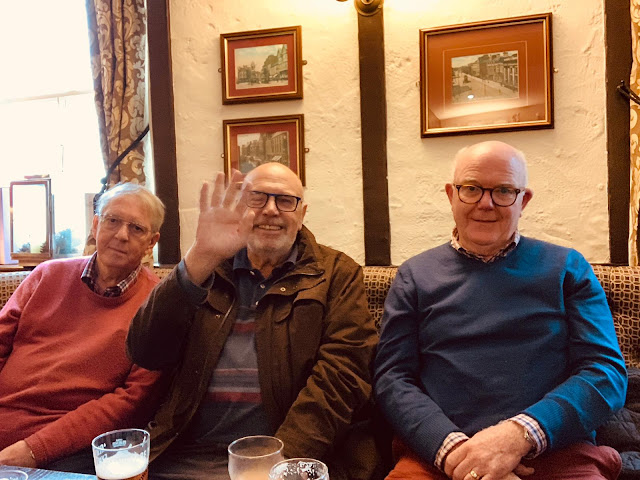 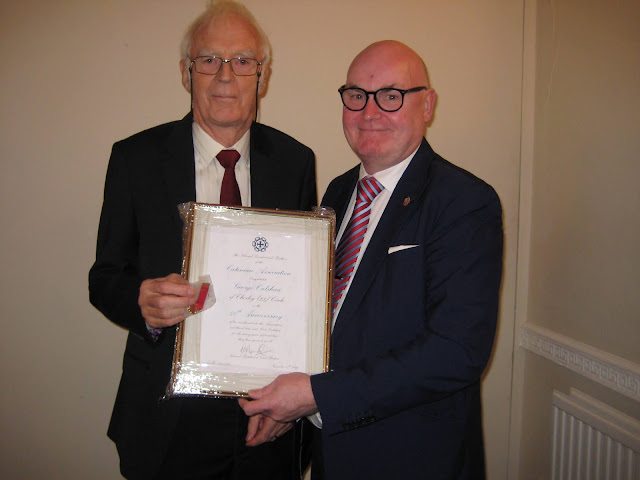 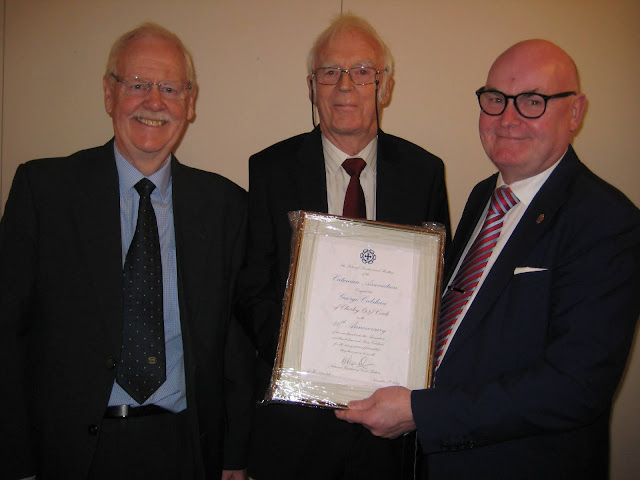 As the various lockdowns caused by the Covid-19 pandemic grew to a close the members of  Provincial Council debated the size of their funds.  They came to the conclusion that the monies held were in excess of the likely requirements of the Province and therefore decided to make a donation to charity.  Various charities were mentioned but two made it to the top of the list and each was to be given £1,000.

Preston and District Circle 144 were  about to hold a Charity BBQ to raise money for Brother President, Shaun Horsfield's, chosen charity, Aid to the Church in Need (ACN).  The BBQ was held in a 'medieval' barn at Haighton Hall Farm.  On the day and along with a number of generous donations they raised about £1,700 for the charity in addition to the donation from Provincial Council.  See the post below dated 13 August 2021 for details of the event.

Now the son of the long time Secretary of Westmorland Circle, Brother Paul Bates, came up with a challenge to celebrate Paul’s 70th birthday - to run Coast to Coast along Hadrian's Wall over three days. A distance of 94 miles.  Paul and son, Tom, set off from Bowness-on-Solway on the coast west of Carlisle and finished on the beach at North Shields near the entrance to the River Tyne east of Newcastle-upon-Tyne.  Paul says that day 1 was ok and they covered 36 miles, but he found days 2 and 3 hard despite the fact that he has been running the Cumbrian fells for many years.  For the most part of these days they did run but towards the end of the day it was more of a crawl. 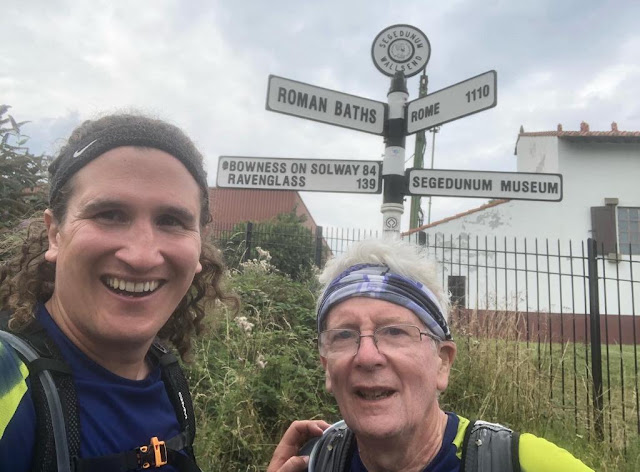 They were spurred on knowing that the Catenian Association had donated £1,000 for their efforts for their chosen charity Alzheimer's Society.  Paul, a retired GP, considers this to be a very relevant charity as dementia has an impact on most families in some way.  Father and son enjoyed spending three days running together through beautiful Northumberland, but Paul thinks he will only accept easier challenges in future. 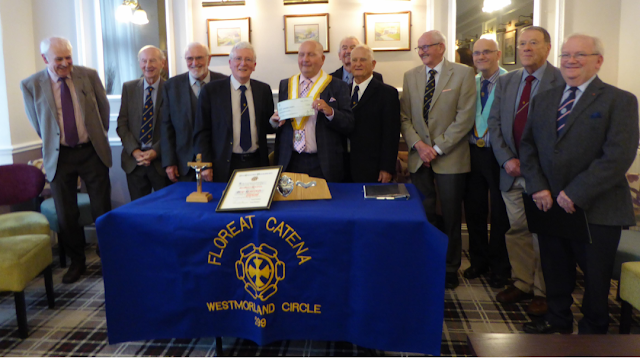 Posted by Robert Thompson at 16:32 No comments:

For the second time the Circle were made very welcome at the Oakwood Hall Hotel in Bingley, Yorkshire.

On the Saturday the majority of the party enjoyed a trip on a steam hauled train on the Embsay and Bolton Abbey Steam Railway.  We filled two compartments of a carriage from the 1960s.

Boarding the train at Embsay on the outskirts of Skipton we travelled at a leisurely pace enabling one to take in all the magnificent countryside.  At Bolton Abbey station we were able to get refreshments whilst the engine changed ends.  Back at Embsay I hoped to get a group photo with the engine in the background.  Suffice to say, despite my best efforts, this was the best I could do – it was like herding CATS! 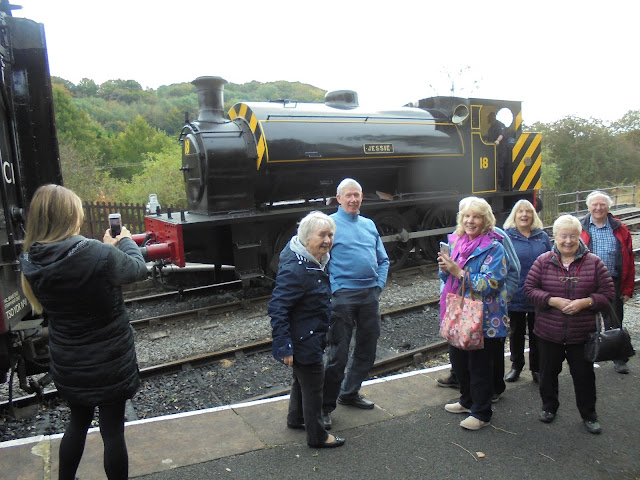 To achieve my aim of a group photo we reassembled outside a posh looking carriage (why didn’t we travel in it?). 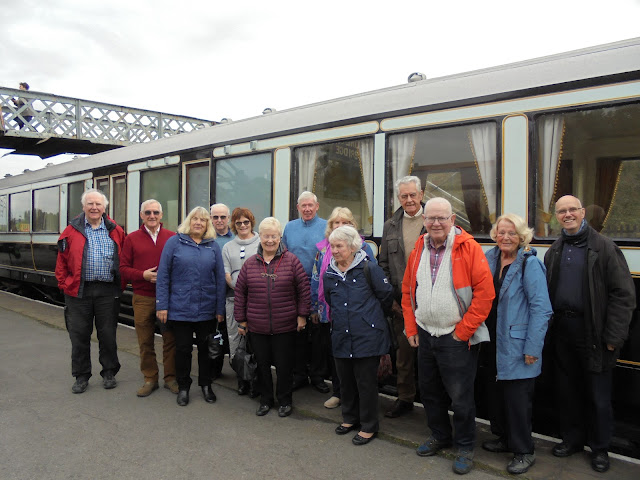 Four other members staying at Bingley went for some retail therapy.

Now there should have been 19 of us on the weekend but a couple had to pull out at the eleventh hour.  It is thought that one reason was the poor chaps confusion of smart casual and ties which resulted in him being admitted to Blackpool Victoria Hospital Casualties dept. We wish you a speedy recovery Mike. 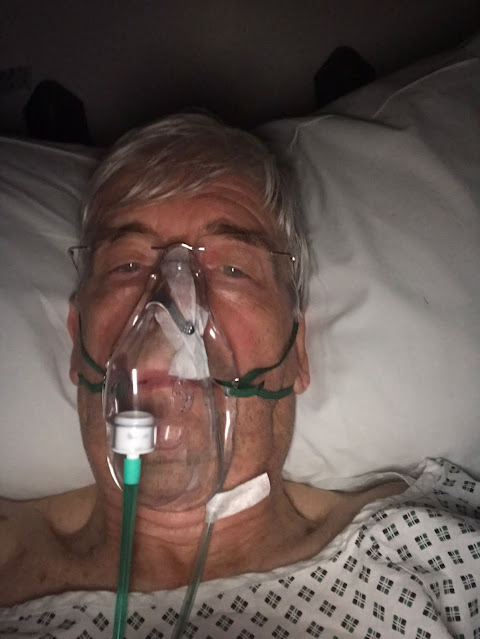 Posted by Robert Thompson at 19:09 No comments:

At the September meeting of Chorley Circle Brother Brian Bunting celebrated 50 (+1) years membership of the Association. The celebration should have taken place in 2020, but was prevented by Covid regulations.

After the meeting over 50 Brothers and ladies enjoyed dinner, at which Brian was presented with his Anniversary Scroll by Immediate Past GB National President Eddie O’Donnell. 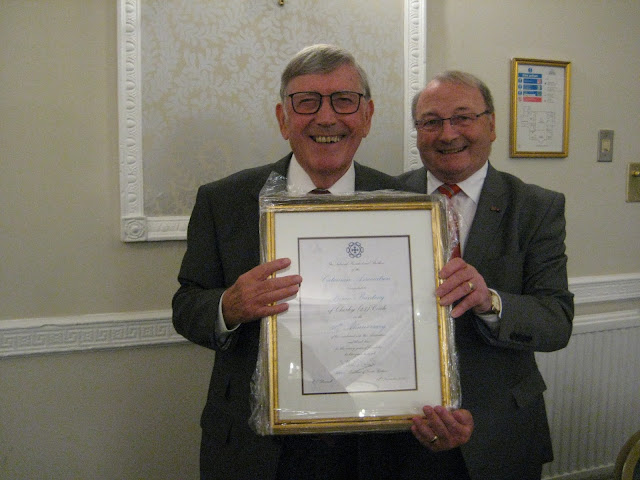 Brian started his working life as a plumber, but, after completing his apprenticeship, became an Insurance Agent, eventually becoming an Area Manager with Liverpool Victoria. In that position Brian and his wife, Margaret, and family, moved around the UK, living in Rochdale, Waltham Abbey, Handforth, Kilmalcolm, and Chorley.

Brian first joined Rochdale Circle in 1970, before transferring to London Charterhouse, Ringway, Chorley, and then back to Ringway when he moved house to be closer to family. He will maintain his membership of Chorley Circle as a joint member.

A lifelong supporter and season-ticket holder of Bolton Wanderers FC, Brian attends every home game with his two sons.

Posted by Robert Thompson at 15:48 No comments:

The brothers and wives of Preston & District Circle celebrated
President's Sunday recently with a Mass at St. Mary's, Fernyhalgh, follow by a splendid meal and social gathering at Samlesbury Hall, formerly the home of St. John Southworth, one of the Lancashire Martyrs. 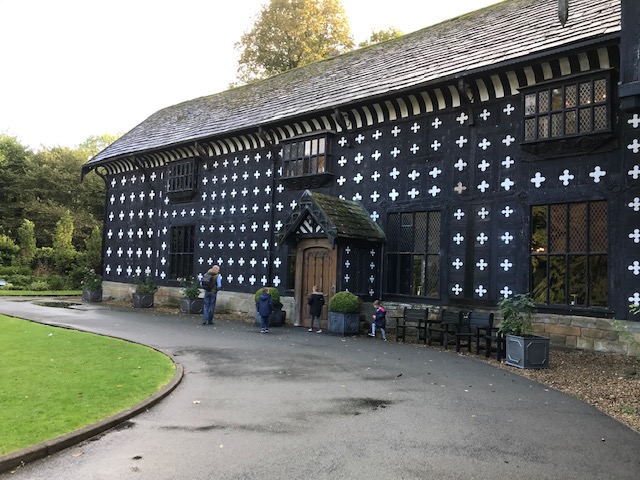 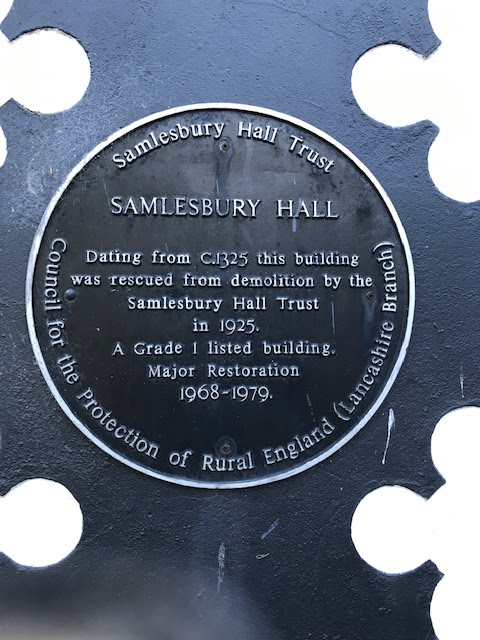 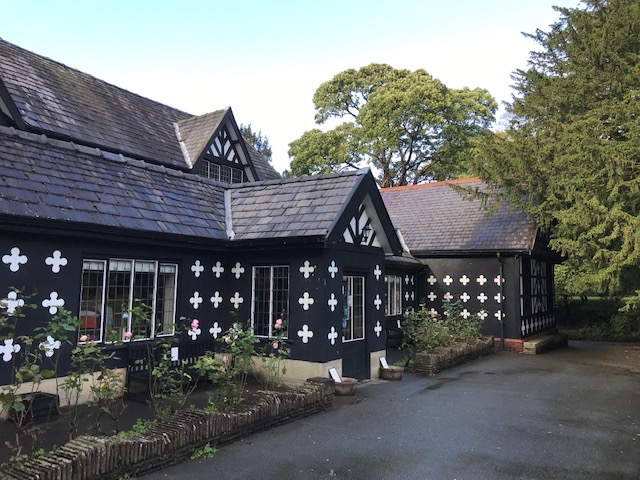 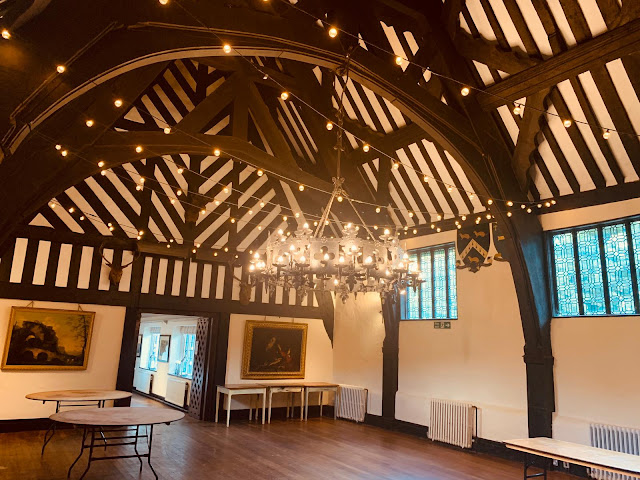 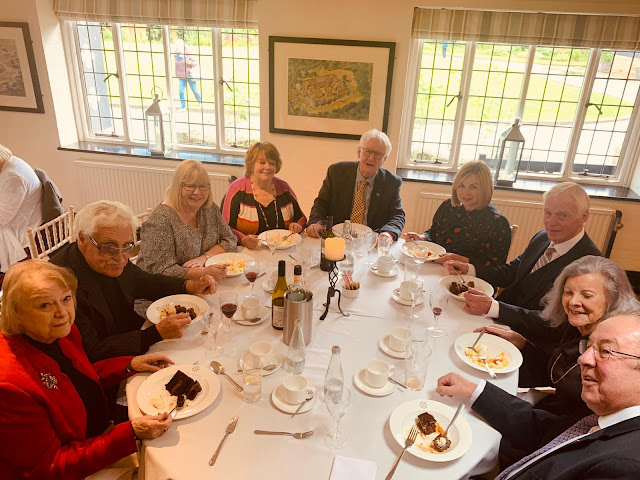 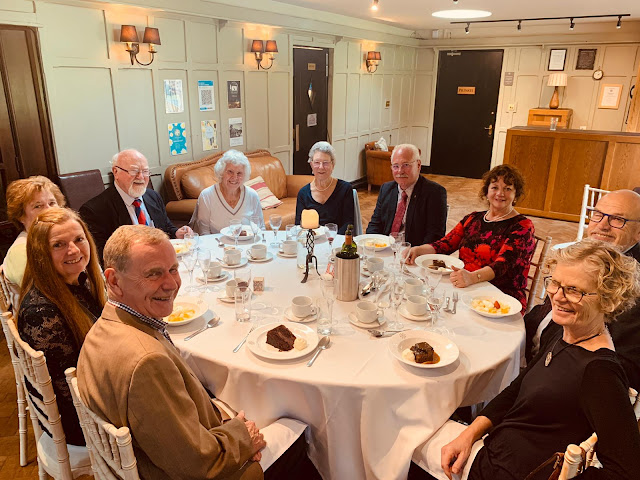 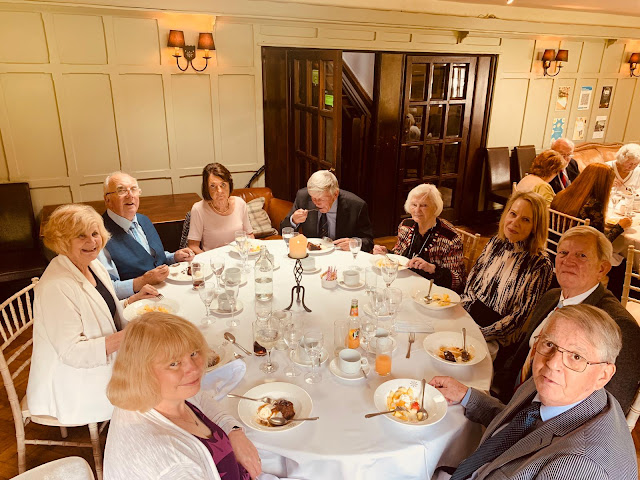 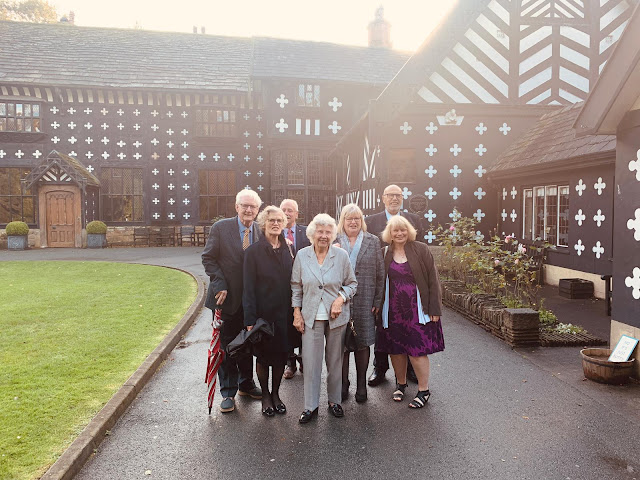 The webmaster can be contacted at the above email address.

Province 10 has approximately 400 brothers. It covers parts of Lancashire, south Cumbria and North Yorkshire. It touches on the dioceses of Lancaster, Salford and Leeds as well as the Archdiocese of Liverpool. There are 13 circles covering Kendal in the north to Chorley in the south, Lytham St Annes in the west and Skipton in the east.